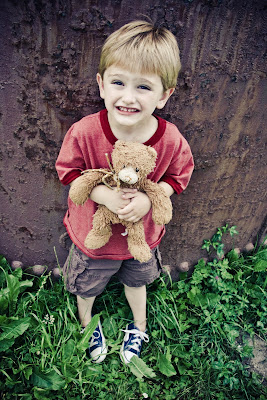 Anyone that has spent any time with my little family knows that there are really five of us.  Steve, Lex, Hayes, Noah, and Teddy.  Reading an excerpt from Home by Anita Kaushal on ABT this morning has me thinking about this little threadbare, loose-jointed, and lets face it, pretty nappy guy this morning.  He's been with us since the beginning, and has never been gone more than three days. (This was during his famous trip to the "castle up north".  When Hayes was two, Teddy was MIA for three days and Hayes was devastated.  The only explanation Hayes had was that Teddy was visiting the castle up north.  It took us three days to find him and realize the castle up north was really the space between the closet rod and upper shelf in Steve's closet.)
Teddy has cuddled with Hayes every night; told him stories and harbored his secrets; been to the circus, Key West, show and tell more times than I can count, and the doctor; has been rescued from a dog's mouth, some older kids at a park, and frequent attacks from really big dinosaurs.  He's smart, silly, likes to eat cereal and fruit snacks, loves to be tossed up in the air, and has a magic wand and deep voice.  He also gets to have a birthday party, complete with mac n' cheese, cupcakes, and the song, whenever Hayes has a really bad day.  It always works. 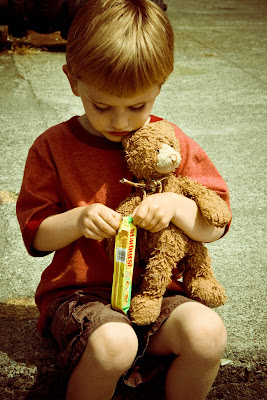 Teddy has always been included in the family pictures, so the outward effect of all the love he receives has been as well documented as Hayes's growth into a creative, tall, sweet-natured little boy.  And while others often comment on their often equally rumpled appearances, I think they both just keep getting more handsome everyday.
"You’ll never know which thing will become the best-loved, can’t-do-without, the night-time necessity. It might be a hand-stitched hand-me-down, a bright new soft toy, or a well-used blanket. Whatever they choose, it will mean security to your children and bring a sense of personal belonging and wellbeing. And you’ll end up treasuring it almost as much as they do."
--Anita Kaushal, Home 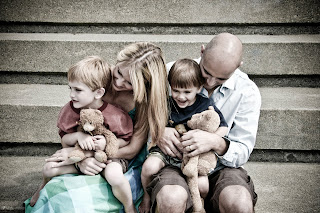 *While Noah is pictured above with Zosa, it was a short lived friendship.  Noah is much more attached to a blue blanket that he named Momma, followed later by Blankie Momma.  And while it absolutely melted my heart to have his most beloved thing to snuzzle with named after me, Momma just hasn't quite developed the personality and charm that Teddy has.
Posted by Alexa Johnson at 11:12 AM

this is the sweetest most hilarious post. i absolutely love teddy and hayes. what a friendship