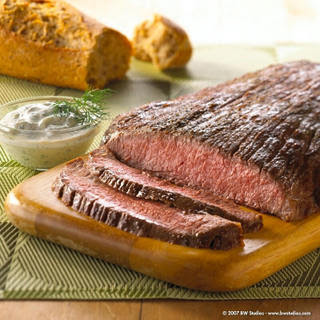 I realized the other day that I have a select little group of recipes that I really consider my "summer repertoire". I thought I'd share a few of them over the next few weeks. The common elements to them all? FAST and EASY (it's summer!) and delicious. Many are family heirlooms of sorts, including this one.
Created by my Uncle Harry, this steak marinade is one of those family classics that absolutely everyone in the family uses, and it's foolproof. There have been a few times that I've felt experimental and tried preparing flank steak another way (sorry Uncle Harry), but I ALWAYS come back. Now, I have several friends that swear by Uncle Harry too, though they've never met him. I'm sure that this recipe is all that I'll ever inherit from the dear man, and it's enough for me! (He and Aunt Francy also took me in one summer during college when I was doing an aquarium internship on the Washington peninsula. I was suffering from a broken heart--and moping around--AND I brought the most obnoxious love bird with me. Let's just say he owes me nothing!)
The best part of this recipe is that it's one of those cheater recipes--it actually tastes better with garlic and ginger powders from the can rather than the real thing (no stinky garlic hands!). It will take you four minutes tops to whip up. Let it sit overnight, and toss it on the grill the next day. Dee-lish.
Uncle Harry's Flank Steak
Note: Don't try this on other cuts of steak. It will work ok, but it won't be anything to write home about. You'll just think "Meh. What was she raving about?" Just get the flank steak. It's not a very expensive cut of meat anyway.
Whisk together:
3/4 cup vegetable or canola oil (not olive! it has a low smoke point)
3/4 cup soy sauce
4 tblsp. honey
1 tsp. ginger
1 1/2 tsp. garlic powder
Put a flank steak in a large ziplock bag, pour marinade over, and refrigerate for 24 hours. Then, grill it up (I happen to think that this should be a very brief process that simply stops the meat from mooing and no more, but do as you like) and cut into thin slices ACROSS the grain of the meat.
Oh, and picture from here. I just couldn't bring myself to take a picture of a steak. It will look like the one above, but don't expect to get a little bowl of fancy condiment sauce out of this recipe just because it's in the picture.
Posted by Alexa Johnson at 8:00 AM

LOL!! Somehow, when I cook, it never looks quite as pretty as in the pictures!! It tastes good - but I definitely wouldn't expect the condiment dish next to it!!

This recipe sounds delish - I will have to try it out and let you know. Has Uncle Harry been to Texas?? ;-)

It's been almost a year since you posted this, and I wanted to tell you I finally got around to trying the recipe today -- so good! We just had it with grilled corn on the cob and some nice bread. Perfecto! Thanks for sharing.