I have to admit...I haven't been hanging out in this weird blogosphere world for long (though obviously long enough to pick up some geeky lingo). So I'm still learning...and you are all bearing with me (which I really appreciate!). And just yesterday...I learned about something really great that you might already know about, but I thought I'd share just in case!
But first, a short time-line, so that I can give credit where it is due:
Mid-early 2002?: Hear the word blog, can't figure out why people would want to put their diary on -line for the world to read. What a bunch of emotional exhibitionists!
February 2004: Friend Sarah tells me about Orangette, and I'm so taken with Molly's writing and superb recipes that it is my homepage for the next year. Find the best banana bread recipe on earth*, never go back to the classic.

2005-early 2008: Occasionally look at a few cooking blogs now and then.
January 2008: Noticing more wedding and decorating blogs, getting hooked. Friend Robin mentions that her husband has named her "Bloggy" because her relaxing every night is looking at blogs for design help for new house. Friends in the biz say that its a great way to let clients know a little more about you.
February 2008: Spend a few frustrating days messing around with various blogging programs, and start Fiore fresco.
March 2008: Worry obsessively that no one at all is reading the blog, get some very sweet comments by friends and clients that they enjoy it and are passing it on. Still worry obsessively that no one is reading blog.
March 23, 2008: Read on Elizabeth Anne Designs that she loves her Google Reader. Her WHAT? You mean, I can get updates sent to me, in one place, so that I know as soon as people have posted? So that I'll remember each day to check my favorites? You're kidding!
March 25, 2008: Figure out how Google Reader works (five minutes), load some of my favorite blogs (another five minutes), and have a relaxing and inspirational afternoon catching up with news in the blogosphere! 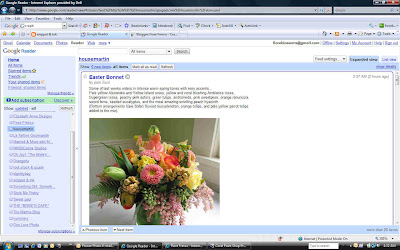 March 26, 2008: Can't sleep in the middle of the night, check my Google Reader, and realize that I haven't made it possible for any of you to add Fiore fresco into your reader. Promptly resolve issue!
Daytime, March 26, 2008: You, dear reader, check out Google Reader and hopefully give it a try! Load up Fiore fresco and a few others, and you'll soon be wasting (I mean saving) as much time as me!
Note: Adding subscriptions was the only tricky part to the Reader (because there are a couple of ways to do it, and some seem to work better than others). I found that clicking the orange feed button in your toolbar put things in the wrong spot. The best way was to go into Reader, type the name of the blog in the green "add subscription box", and it will work like a search engine. Click "Subscribe" under the blog, and you're all set!
*Banana-Coconut Bread
Recipe and picture from Orangette: (with a minor change, shown in green) 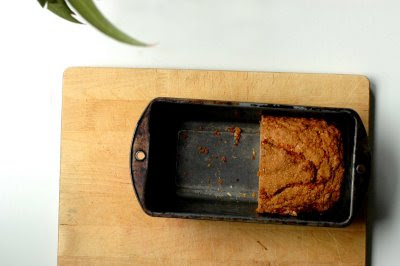 Adapted from HomeBaking: The Artful Mix of Flour and Tradition around the World, by Jeffrey Alford and Naomi Duguid.

I have one word for you: demerara. This bread is lovely in its own right, but it owes a good deal of its charm to this very special sugar. Demerara has large, golden grains that sparkle in the light, and sprinkled on top of this banana-moistened batter, it yields a crisp, sweetly craggy crust that steals the show - and that stays crunchy on the second day, even! You can buy demerara sugar online from any number of sources, or look for it in your local gourmet store. I found mine at an upscale market nearby, and I think Whole Foods also carries it. Either way, buy it. If you’re anything like me, you’ll want to sprinkle it all over the place.

Preheat the oven to 350 degrees Fahrenheit. Butter a standard-size loaf pan, and sprinkle with 1/4 cup raw/Demerara sugar (the same way that you would usually use flour). In a blender or food processor, purée the bananas. Measure out 1 ½ cups of purée. Set the purée aside.
In a medium bowl, whisk together the flour, baking soda, nutmeg, and salt. Set aside.
In a large bowl (or the bowl of a stand mixer), beat together the butter and sugar until light and fluffy. Add the vinegar and rum, and beat to mix well. Add the banana purée and the flour mixture alternately, about 1 cup at a time, beginning with the banana and beating to just incorporate. Use a spatula to fold in any flour that has not been absorbed, and stir in the coconut. Do not overmix.
Scrape the batter – it will be thick – into the prepared pan. Smooth the top, and sprinkle evenly with the remaining demerara sugar.
Bake for 50-65 minutes, or until the top is nicely browned and a toothpick inserted in the center comes out clean. Let cool on a wire rack for about 20 minutes; then turn the loaf out of the pan and allow it to cool completely. This loaf will keep, sealed airtight, for three to four days, although it is best, I think, on the second day.
Yield: 1 loaf

Posted by Alexa Johnson at 4:31 AM

lol. you've been in my google reader since day one! :) so glad i can be a party to you wasting tons of time like the rest of us.

Well, I've been so inspired by all your blog posts and truly enjoy all the great suggestions. I do see how this blogging can very quickly become a habit. Thanks for introducing and explaining the "blogosphere" to those of us not quite there yet, or am I the only one... Reading yours daily has made me wish for just a few more hours each day to write my own, just not sure how to fit that in and give it the time it so deserves. How funny that you would post the banana bread recipe, my son and I were just talking about making some tonight, now we'll have a new one to try.

Thanks so much! yay! People are reading!

And Katy-I really think you should consider the guest blogging offer! It would be fun...

I started to set up my google reader today BUT I don't like how I can't see the cute colors and design of each blog. I find the royal blue on the reader to be quite ugly! Anyone else agree that the google reader may make life easier but it just ain't as pretty? I want the best of both worlds!

Heather, you are right. I certainly don't enjoy the lack of asthetics in google reader, but I love the time-saving trade-off. I make sure to click anything interesting into full page view on the original blog. Come on google--we know you can fix this!